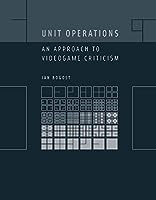 Heidegger's essay on technology is structured as a haptic analysis, akin to a walk in the woods, by which the stroller happens upon matters of interest. He takes this casual encounter as a paradigm for resistance. Like Heidegger's logic of the promenade, unit operations meander, leaving opportunities open rather than closing them down.

For Heidegger, this is the realm of art, expressive units that reconfigure our relationship with technology in new ways. Unit-operational systems are only systems in the sense that they describe collections of units, structured in relation to one another. However, as Heidegger's suggestion advises, such operational structures must struggle to maintain their openness, to avoid collapsing into totalizing systems.

Unit operations articulate connections between nodes in networks; they build relations. Rather than attempting to construct or affirm a universalizing principle, unit operations move according to a broad range of diverse logics, from maximizing profit to creating new functional capacity.

Murray calls for the development of "new narrative art" that applies the themes of literature to the digital.

Walter Benjamin observes a "decline in the aura" of mechanical reproduced artifacts, a dissolution of the bonds between artistic production and ritual." In Benjamin's conception, when representative practice became possible anywhere, anytime, the ties between art and tradition unknotted, freeing the art for use in other contexts, such as protest and revolution.

By encapsulating the customer-account relationship, and by reinforcing the behavior of banking through software systems, the banking industry has succeeded in remapping the material reality of capital exchange with its objectified, encapsulated object equivalent.

In his writings on hypertext, George Landow

For Aarseth, videogames and related technologies offer a window onto a broader, perhaps unexplored functional tradition; they "should be studied for what they can tell us about the principles and evolution of human communication °15 These principles rely principally on configuration-the arrangement of an I Ching hexagram or the arbitrary progression through a virtual space in Zork.

Aarseth recognizes adventure games like Adventure and Zork as objectified systems that generate units of textual meaning. Between the lines of Aarseth's reading of adventure games are poignant insights into the proto-object design those systems exhibit, and how such architecture affects the kind of textual output the works create.

We should attempt to evaluate all texts as configurative systems built out of expressive units. This entails training ourselves not only to "understand simulationsas interpretations of the world," as Janet Murray suggests, but also to understand narrative texts as simulation.

Because flanerie is fundamentally a passage through a space, it bears much similarity to the configurative structure of procedural texts.

In the alienating confusion of the procedural city, Baudelaire's lyric posits the figure that fascinates as a replacement for the woman's companionship.

Amelie is no longer the subject of the encounters she creates; instead she is their designer, so versed in the logic of modern experience that she crafts representations in blood and flesh that Baudelaire and Bukowski had to encounter for themselves, then document. Amelie shows us that the chance encounter is such a replete structure that it can be acted out as a unit operation. She has become the programmer of her own procedural urban encounters.

Despite its popular reception, Amelie is hardly a film about an innocent girl making good in the world; it is about the struggle to reject a hundred-year-old obsession with Baudelaire's bequeathed way of using modern life.

Will Wright has explained that some of the interaction design of The Sims is based on Scott McCloud's principles of comic design. McCloud argues that in comics, the reader fills in the spaces between the panels, projecting themselvesinto their reading and interpretation of the story.

Derrida gives a name to this obsession to return to stable remembrance: he calls it mal d'archive, or "archive fever," a "a compulsive, repetitive, and nostalgic desire for the archive, an irrepressible desire to return to the origin, a homesickness, a nostalgia for the return to the most archaic place of absolute commencement."44 Archive fever is the simultaneous drive toward and fear of archivization.

Proponents of networked tools often privilege the structure of networks over the liberated gestures they facilitate. In crude terms, the problem with complexity is that it misses the trees for the forest-an unusual but increasingly common cultural inversion.

One ofthe characteristic features of the modern is a lack of direction in, or a confused relationship with, time and space.

System operations are thus totalizing structures that seek to explicate a phenomenon, behavior, or state in its entirety. Unlike complex networks, which thrive between order and chaos, systems seek to explain all things via an unalienable order.

As a simulated model of daily life, The Sims makes certain decisions about what kinds of representations to include, and what to leave out. This "weakness" is also a strength, because it increases the game's possibility space.

Talking about the inspiration for The Sims, Will Wright offers:

One of the biggest things that I wanted to show was how, basically, the real resource everybody has in life is time. You can convert time to a lot of other things—you can convert it into money, objects, and friends—but how you choose to spend your time is how you're playing the game of life. That's the one thing that you don't get more of, really. So, time management was a big thing I wanted to at least make people more aware of. It's not so much preaching, "Here's how you should spend your time." It's just interesting when you sit back and think about how you choose to spend every minute of your day.

A simulation is a representation of a source system via a less complex system that informs the user's understanding of the source system in a subjective way.

Simulations may be our best opportunity to create what Fredric Jameson calls "an aesthetic of cognitive mapping: a pedagogical political culture which seeks to endow the individual subject with some new heightened sense of its place in the global system." Playing a simulation means becoming engrossed in a systemic logic which connects a myriad array of causes and effects.'0

In complex network theory terms, GTA derives its representational power from the links or edges that connect the player's possible unit operations together.

GTA's structured configuration of possible actions within a larger space suggests a broader expressive tactic: space is used not for the repleteness of exploration, but in order to structure smaller, singularly meaningful experiences.

Unlike virtual reality installations, which propose to create a liberating immersionby physically enclosing the human subject in a computer system, GTA offers a convincing and meaningful world in a technically bereft environment.

We should be less inclined to condemn works like GTA for their brutality than to try to evolve the core problem they present: how to understand and refine each unit operation of our possible actions so we can interrogate and improve the system of human experience.