Can parts of you be virtuous?

In yesterday's 📝 More Weird Fishes: Gods, Languages, Addictions I started thinking about the human Person as a kind of aquarium of what I'm borrowing a Radiohead lyric to call "weird fishes."

Instead of fishes, Timothy Morton invokes the image of ghosts:

We don’t have to agree that the Buddhist idea of no-self means that you’re just a bunch of atoms. What it means instead is that you are open. You are a haunted house. *

Instead of a single unified top-level self that dominates my mind monarchically, I am a tangled multiplicity of different structures and processes. This is not to say that there's no coherence, no hierarchy, but like 📰 The Government Within says:

Some people may be organized like monarchies with a strong central self, others may be more anarchic bundles of disparate impulses, others may be flexibly improvising democracies of interest. A kind of mental anarchy is probably the infantile ground state, with structures of governance emerging over time. *

On the nature of the self, MacIntyre argues against the autonomous & independent agent of the liberal worldview:

I confront the world as a member of this Family, this Household, this clan, this tribe, this city, this nation, this kingdom. There is no ‘I’ apart from these. *

You could say it's a historical and material conception of the self. I am an organism that grows embedded in nature and society. There's no reason to assume that I transcend this rootedness. For MacIntyre, this is the origin point of morality:

I am someone’s son or daughter, someone else’s cousin or uncle; I am a citizen of this or that city, a member of this or that guild or profession; I belong to this clan, that tribe, this nation. Hence what is good for me has to be the good for one who inhabits these roles. As such, I inherit from the past of my family, my city, my tribe, my nation, a variety of debts, inheritances, rightful expectations and obligations. These constitute the given of my life, my moral starting point. This is in part what gives my life its own moral particularity. *

I notice this paragraph has both diversity—this or that city, these roles, a variety of debts—and unity: I, one, me, my life.

Remember the diagram from 📰 Hallucinated Gods from yesterday: 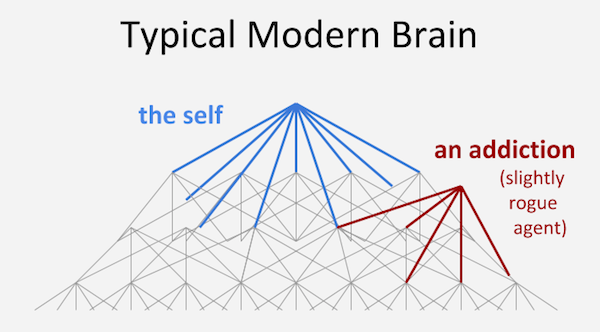 The diverse elements that make up my life's particularity are "weird fishes" or "ghosts." They are clusters of agency and desire within me. My Addictions also give my life moral particularity; my daily need for caffeine is a real structure in my body.

In fact After Virtue argues at length about the possibility and necessity of seeing a person's self as a unitary entity. This argument is connected to the diversity and unity of virtue.

A class of weird fish that's particularly thematized in After Virtue is the craft, the community of practice, the productive Tradition. Here is where a person first encounters the virtues, and MacIntyre gives a preliminary first definition of Virtue as being a quality that allows me to excel internally within a tradition.

So if I have a passion for woodworking, and I enter into some kind of social tradition of woodworking, then within this part of my life I come to value sturdy and elegant joinery. This doesn't require a unified self. My woodworking passion can be a nexus of Agency or a subagent with its own values and Virtues.

And so it's possible that my life and my body would be a rather disjoint assemblage of different passions, addictions, relationships that don't add up to a cohesive meta-agent which unifies all of these structures.

As a thought experiment, I can imagine having two homes, one in Rīga and one in Stockholm. I would move between them on a weekly basis. In Rīga I speak Latvian, I'm a woodworker, I have a partner and a son. In Stockholm I speak Swedish, I'm a web app developer, and I live alone like a bachelor. My circles of friends are disjoint, I consume different newspapers, etc. I exercise different skills, aim for different goals, my moods and attitudes are different.

Everyone's life is a little bit like this in some ways, and I think it means we need to consider "the self" as a way more complex and dynamic phenomenon than we normally do.

Even when Buddhist meditators talk about the nonexistence of the self, they often seem to conceive the nonexistent self as something that's by default unitary and overarching. But if there's no grand meta-self, how about this ecology of weird fishes? There's still agency, roles, and virtues clustered around identity nexuses.

I'm not sure what point I am trying to make or whether this all makes sense in an interesting way for anyone reading. But I feel like there's something important about looking at virtues and selfhood like this. Starting with the multiplicity that we're always made up of rather than jumping ahead to cohesive self-identity.

And I think it's interesting that MacIntyre also has this progression that starts from specific virtues internal to productive traditions and moves up towards virtues that are "genuinely Aristotelian" which means they apply across roles and traditions.

Such virtues are not developed within particular "weird fishes." The virtues that I enact specifically as a woodworker or a web app developer are then supposed to be integrated into higher level virtues. What entity can carry these virtues? The Self.